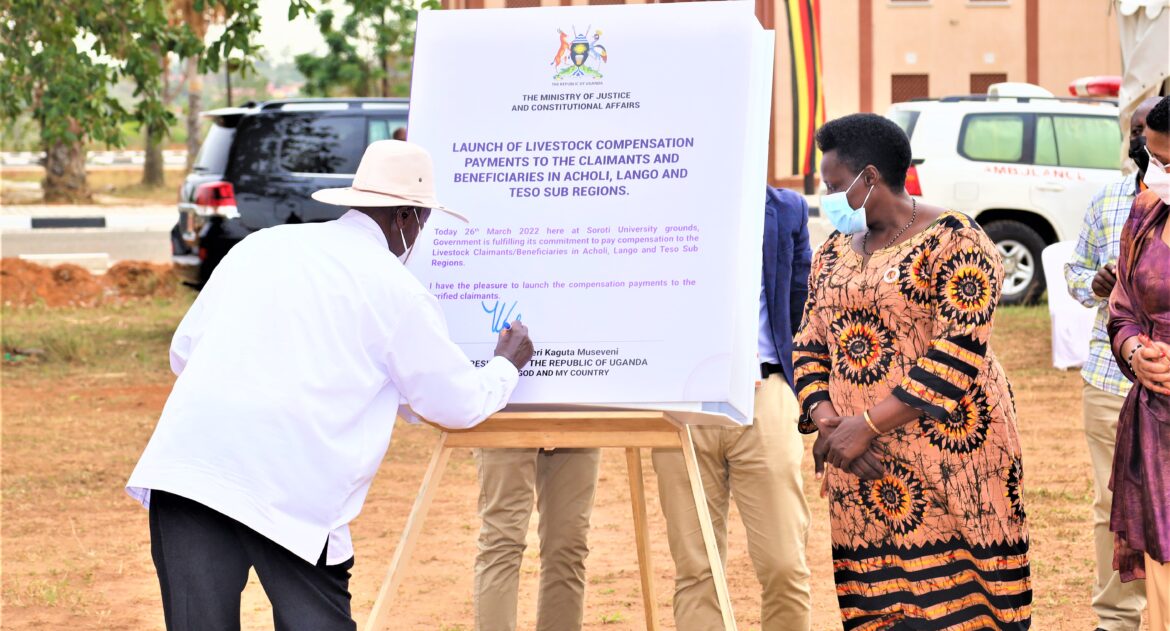 The function at Soroti University grounds in Soroti City, was attended by many dignitaries who included H.E the Vice President Jessica Alupo, the Rt. Hon Speaker Anita Among, Cabinet Ministers among them, Hon. Acting Minister of Justice and Constitutional Affairs (MoJCA) Muruuli Wilson Mukasa and Hon Attorney General, Kiryowa Kiwanuka.

In his speech, the President advised the claimants and beneficiaries to avoid wasting the money they shall receive by marrying more women, but to invest it in commercial agriculture ventures that shall improve their house hold incomes.

The Deputy attorney General, Hon. Jackson Kafuuzi, who spoke on behalf of the Ministry, gave a brief on the genesis of the compensation claims, that arose out of the various insurgencies starting with from the 1979 liberation war, that ravaged Northern and Eastern Uganda, adversely impacting the local economies and livelihoods of the populace there.

In the Financial Year 2021/22, MoJCA received UGX Shs 50 billion in respect of compensation for the war debt claimants. The Total number of the submissions received to date stands at 19,667claimants/beneficiaries. The fund available have been prorated per region based on the number of districts therein with each District having an allocation of 1,724,137,931

HE the president closed the function by signing the ceremonial launch Pad and handing over Dummy checks to selected beneficiaries.

administrator
MOJCA’S  STATEMENT ON THE LAUNCH OF LIVESTOCK COMPENSATION PAYMENTS TO CLAIMANTS AND BENEFICIARIES IN ACHOLI, LANGO AND TESO SUB REGIONS (Prev Entry)
(Next Entry) Court Awards and Compensation for this quarter(First Quarter – FY2022/23)