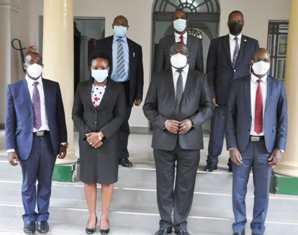 The Chief Justice, Alfonse Owiny – Dollo, on Monday (July 12, 2021) officiated the swearing-in of two new Judicial Officers who were appointed to the lower bench by the Judicial Service Commission.  Mr Edoku John Paul (formerly Senior State Attorney in Attorney General’s chambers) and Mr Kayizzi Ronald (formerly an attorney in private practice) were sworn in as deputy registrar and Chief Magistrate. Hon. Justice Owiny – Dollo welcomed the duo to the Judicial family. “You have now brought the total number of Judicial officers to 373, including the upper and lower bench,” said the Chief Justice.  “Having emerged victorious in the competitive selection process, I have no doubt this is deserved and has come when the Judiciary is in dire need of more Judicial Officers with scarce distribution across the country. I thank the Chief Registrar for acting swift to have the function performed in spite of the COVID-19 challenges.” The Chief Justice asked the new officers to perform their core duty of adjudication with the diligence it requires and serve every person before them according to the law.  The Chief Registrar, HW Sarah Langa Siu, urged the new officers to work with zero tolerance to corruption and exercise the attitude of service above self.  Notably present at the brief ceremony held at the Judiciary Headquarters in Kampala were HW Jamson Karemani (Public Relations Officer), HW Ayebare Thadius Tumwebaze (Private legal Secretary to CJ) and HW Gakyaro Allan (Personal Assistant to the CR). HW Edoku has been deployed to the Registry of Planning and Development, whereas HW Kayizzi, who once served as Magistrate Grade One at different court stations in the Judiciary, moves to Moyo Chief Magistrates Court.